Created in the late 1980s, AJ Hackett International has gained a reputation as a world leader in the adventure tourism industry. The AJ Hackett Cairns Bungy tower was the first purpose-built bungy tower in the world, which opened on August 11, 1990. In 2000, the Minjin – the world’s biggest jungle swing – opened at the Cairns site. Situated 15kms from the CBD on the foothills of Saddleback Mountain, the tower stands 50 metres above a 5m-metre-deep pool.

The site has purpose-built reception area, bar, viewing decks, Minjin Jungle Swing and an outdoor amphitheatre. Cairns is the only Bungy site in the world to offer a world class Jump Menu allowing Bungy enthusiasts to Jump 16 different styles, from the classic swan dive to a running roof jump.

Safety:
All Jump crew are highly trained to the highest standards of Jump Master Accreditation and through an independent trainer complete regular refresher courses. AS/NZS 5848 was developed by AJ in conjunction with the New Zealand and Australian Governments. These safety standards are the recognized standard for Bungy Jumping internationally

All activity related equipment used by AJ Hackett International is of the highest available manufacturing standards. All bungy cords are manufactured specifically for each site by AJ Hackett.

Cairns Bungy Facts:
Established: September 1990
Height: 50m/164ft
World's ONLY 16 Style Jump Menu
World's ONLY site that offers a BMX jump off the Tower roof!
196 stairs to the top
Cairns' highest viewing platform
The ONE & ONLY Bungy Tower in Australia
Only site in the world that offers all day jump packages 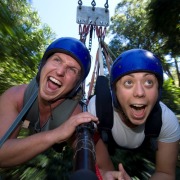 A J Hacket Giant Jungle Swing:  Flying on the multi-person Jungle Swing and reaching speeds of up to 120kph in 3.5 seconds is AJ Hackett’s way of experiencing extreme speed and acceleration together! ...more info 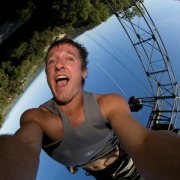 Breathtaking views and adreniline:  Combine the best of AJ Hackett Cairns, Bungy Jump and Minjin Swing in one day and $ave !...more info 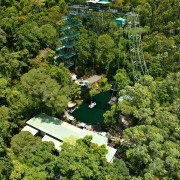 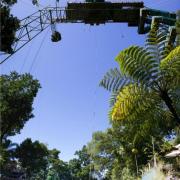 Cairns is the best place to Bungy!!  AJ Hackett's Bungy Tower is located 20 minutes north of the city in the foothills of Saddle Mountain. The 50 metre high tower is surrounded by lush tropical rainforest with panoramic views out to Green Island, The Northern Beaches & The Great Barrier Reef.  A spectacular place to jump! ...more info